On Tuesday, the A-level results in the United Kingdom were published. Due to Covid, rather than sit exams grades were awarded based on teacher assessments. These were audited, both internally and externally. Incredibly, 45% of school leavers achieved A or A* grade. This rose to 70% for those in private education.

At the same time there is a huge concern about the missed educational opportunities due lockdowns and lack of face to face teaching. This leads to the somewhat oxymoronic situation of people complaining simultaneously about the lack of teaching during Covid as well as the inflated grades being awarded this Summer. Those achieving A or A* has increased by 75% since the last time end of year exams were sat for A levels.

Are we really doing these children a favour? What about those who return to sitting exams in 2022 or 2023? If the quality of education increases so much through online learning, why bother with physical presence in school at all.

Or have those locked down really been studying that much harder because there was so little else to do. This would be an insult to those who worked hard for their results in 2019. Were they really just that much more lazy? Distracted by being free to meet up in large groups?

And what does this say to politicians? Get rid of teachers and just have it all done online, with one teacher per subject for the entire country?

The 15th July saw hundred year floods hit Luxembourg. Thankfully the situation was not as desperate as in parts of Germany and Belgium and I am not aware of anything other than material damage. These are some photos which don't do justice to the extent of the local flooding in any way. 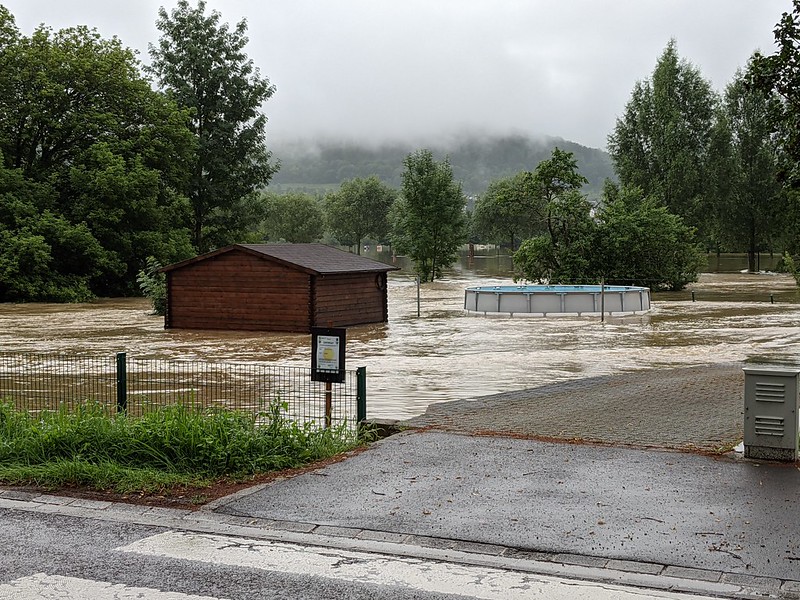 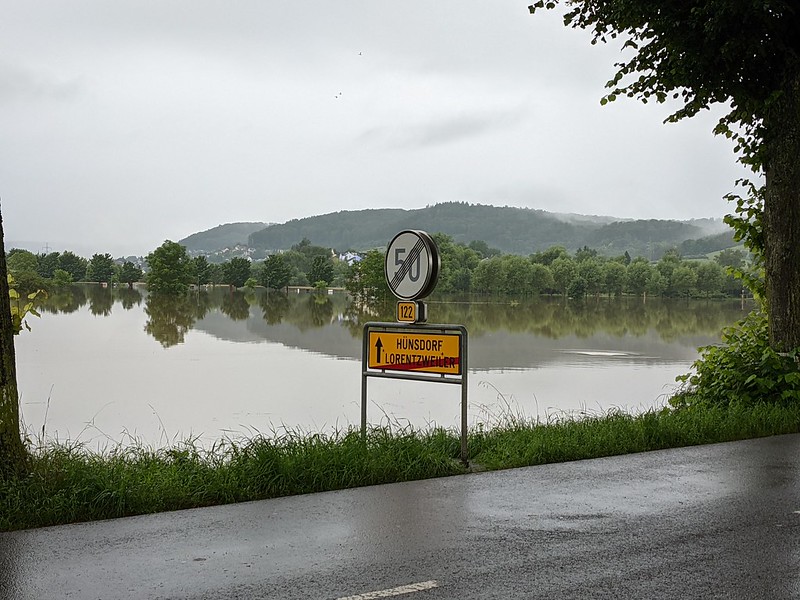 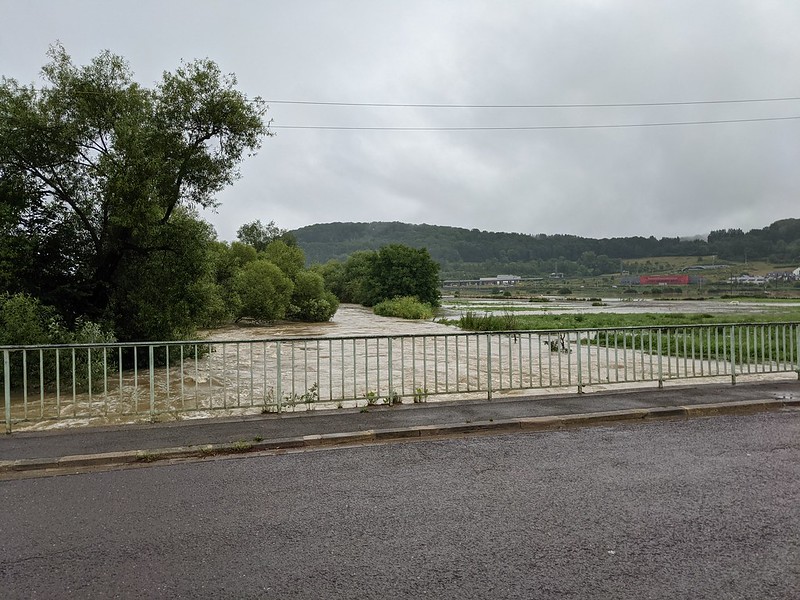 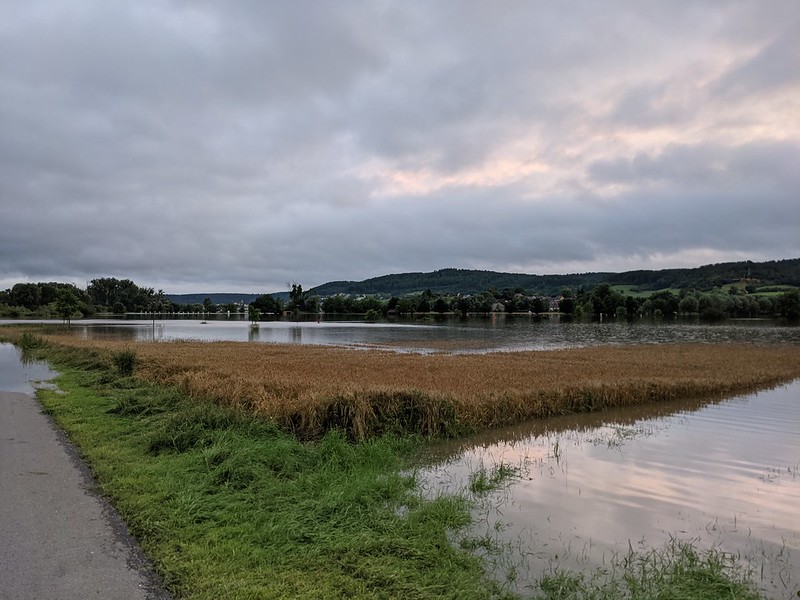 Yesterday I watched the enthralling race at Silverstone. It was the first Formula 1 race ever to use a sprint race to decide the pole position. This was a lack luster affair and did not bring the hoped for extra excitement. They have a couple more races like this, after which I hope they ditch them.

The highlight of the race was the spectacular collision between Verstappen and Hamilton on the second lap at Copse. Having raced nose to nose for the opening lap, Hamilton saw a gap and dummied left before going down the right of Verstappen leading into Copse. They were more or less side-by-side, with Verstappen slightly in the lead, but Hamilton having the inside line. Just before the apex Verstappen pulled across Hamilton's line thinking Hamilton would move further to the right or lift off . He didn't. Verstappen's right rear wheel was clipped by Hamilton's left front, sending Verstappen sideways into the barriers with a 51G impact! He walked away, but was a littler dazed and got checked up in hospital.

The stewards decided this was Hamilton's fault and gave him a 10 second penalty, which he observed during his first pit stop. Their decision read as follows:

"The Stewards reviewed video and telemetry evidence," read their ruling. "Cars 33 [Verstappen] and 44 [Hamilton] entered turn 9 with Car 33 in the lead and Car 44 slightly behind and on the inside. "Car 44 was on a line that did not reach the apex of the corner, with room available to the inside. "When Car 33 turned into the corner, Car 44 did not avoid contact and the left front of Car 44 contacted the right rear of Car 33. Car 44 is judged predominantly at fault."

Whatever happened to letting the drivers race? Is F1 really dishing out penalties based on whether a driver's line will reach the apex. The racing line is not always the one which will win you the race. If in a collision blame is automatically assigned to the guy off the racing line, then what's the point of racing.

Maturing, but not yet mature

My take on the incident starts a few corners earlier, where the situation was reversed. Coming into Brooklands, Hamilton was clearly in the lead with Verstappen going down the inside as you can see in this clip at 1min 10seconds. But Hamilton gave Verstappen space and didn't turn in on him. Verstappen missed the apex and went over the curb. Hamilton ran slightly wide on the outside, knowing that he risked ending in a spin by having his left rear clipped by Verstappen's front right if he stuck to his line. If Verstappen had taken the same approach a couple of corners later he would have come out of Copse second. Yet, he would have had the whole race to catch Hamilton. Even if he didn't, he would have lost only 7 points, maybe 6 with the fastest lap. As it stands, he lost 25 points and the championship is again wide open.

After Hamilton pitted and observed the 10 second penalty he was down in fourth, 15 seconds behind Leclerc. He began to reel him in, passing Norris, Bottas and then Leclerc with a couple of laps to spare. I feel sorry for Leclerc who put in a brilliant drive. But Hamilton showed his class in the second half of the race, despite the crash with Verstappen. Roll on Hungary!

I have to watch the carbohydrates I eat, since I am Type 2 pre-diabetic, I made myself this list of foods I tend to eat by carbs per 100g. I've split them into several categories, based on the carbs per 100g:

My source is basically Google searches. This is a work in progress and will change as I add to this list.

As the richer western countries approach their ceiling of who they can vaccinate freely, they are starting to vaccinate those under 18 in a drive to increase the overall vaccination rate. This is understandable, but I wonder if a better use for those vaccines would be to ship them to poorer countries to help them in their vaccination efforts.

The effect of Covid on the young is very small. It is true we do not know the long term implications of having had covid. Long-covid is a real thing, which also affects the young. But the long term effects of the vaccine are also unknown. It is looking increasingly likely that we will need yearly booster shots. Do we really want to be vaccinating 12 year olds and jabbing them every year for the rest of their lives? This is new territory, it has never been done before.

Let's get the world's adult population vaccinated first. As we get to understand the virus better maybe we will find a single shot solution.

Yesterday I had my second Pfizer jab against Covid. When I had my first jab I felt nothing, no side effects. A slight itch on the shoulder maybe. Nothing worse than a mosquito bite. The second one is a different matter. I woke up this morning sore, stiff and tired. No fever or other flu like symptoms, but definitely worse than the first jab. Hopefully by the weekend I will be better.

This comment on an article about climate change really resonated with me:

It's wrong to frame radical pro climate changes as sacrifices which we have to bear with gritted teeth. Its good for your health to eat less meat, cycle or walk instead of hopping in the car. Its good for peoples health too because of reduced pollution.. Its satisfying to mend thongs instead of throwing them away. Its a pleasure to use beautiful things for a long time crafted by people who enjoyed making them, instead of throwing things away in an endless cycle of obsolescence of the ugly.

Most actions related to stopping cimate change would also be good for our general health, mental as well as physical.

With last month's arguments between the EU and UK, regarding vaccine contracts and deliveries I did some back of an envelope analysis. It seems the real issue is not so much contracts, but the general lack of vacciness, partially due to the inability of one specific manufacturer to deliver their promised amounts of vaccines. Here are the stats as of the 10th April 2021:

All data from Our World in Data.

As can be seen from the table if all the vaccine doses administered by the 10th April had been spread evenly across the EU and the UK, the effect on the vaccination rate of the EU would have been minimal: an increase of 5 doses per 100 inhabitants. But in the UK the effect would have been drastic: a decrease of 31 doses per 100 in habitants. So whilst complaints about vaccine export controls and contracts mimicking such export controls might be valid, the real issue is the limited capacity to produce the vaccines. This is where the focus needs to be - not on blaming each other for hoarding vaccines.

Only those who do not seek power are qualified to hold it.

Nothing new under the sun...

Two images I like which illustrate beautifully fairness, equality and equity.

The future ain't what it used to be

Signs off life may have been found in the clouds above Venus.

Interesting concept of right and wrong. By Iscac Asimov.

The Relativity Of Wrong

After acquiring Flickr, SmugMug have announced a limit of 1000 photos for the free accounts and a doubling of the PRO membership fees. Unfortunately not in that order.  So shortly after cancelling my PRO membership as I was unwilling to shell out double for no useful improvements, I am told I will lose 12000+ of my 13000+ images stored on Flickr. It seems to me SmugMug are blackmailing me to come back... Just as well I've already downloaded and moved all my photos to OneDrive about a year ago. Now all I need to do is recreate the albums and I can say, very sadly, goodbye to Flickr.  Looks like I will also be able to finally start closing my yahoo account.

So, SmuMug bought Flickr from Verizon a few months back (news always reaches me a little later...).  Will that be the end of my Yahoo account? I only have a Yahoo account for two reasons (in that order):

If you don't know where you are going, you might wind up someplace else

When you come to a fork in the road, take it.

90 percent of it is half mental.

It ain't over till it's over.

Nobody goes there anymore. It's too crowded.

It's déjà vu all over again.

You can observe a lot by watching.

I really didn't say everything I said.

And last but not least, this gem:

Always go to other people's funerals; otherwise they won't go to yours.

I came across this post by Joel Spolsky about a new Stackexchange site called Ask Patents for finding prior art of patent applications. This is an excellent idea. If we all analysed one patent a day, most patents applications would be thrown out. Why? Because there is almost always prior art, it's just the patent examiners aren't able to find it due to the way the applications are written.

I had this problem where the Epson Scanner software only opened briefly, showed in the taskbar but never actually displayed the Window. Here's the solution:

I recently installed the Flickr Uploadr app to auto upload my photos from my Galaxy S2 to Flickr. Now that Flickr has 1TB of storage for free it makes it good for use as a backup tool.